WELCOME TO
THE VINTAGE INKWELL ACADEMY!

Welcome to The Vintage Inkwell Academy or simply TVIA. We are an artists resource established to provide rare art instructional resources, tools, tips and a knowledge exchange. TVIA offers a learning and collaboration space for content creators, infused with the same spirit, energy and intent of the Platinum and Golden-Age comics.

THE SECRET ORGIN OF THE VINTAGE INKWELL ACADEMY

In the past few years, I have been closely studying traditional training in illustration. Along my journey, I had found rare and precious art educational resources. Discovering sources to get a hold of these was in some cases very difficult and time-consuming. I often wished there was a central online site that housed it all. To spare others the frustration of traveling down this same road, I thought it wise to share what I had acquired — by making an easy to access one stop site where I could pass along the valuable information I learned.

First off, you should know, that my primary focus is to sharpen my skills and become the best illustrator I can be. Once there, I plan to shatter that plateau and continue to learn and grow to eventually be the best. Once I reach a prime stage of artistic progress, my final goal is to produce dynamic comic book creative content. Time is at a premium and working on anything else steals and delays attaining that goal. Destiny always has its own plans and soon put me on a slight detour that I felt driven to carry out.

Comic Book Plus and The Digital Comics Museum, your two destinations for free vintage comic books from the Platinum & Golden-Age.

So where could I share all this great stuff I found to help others? At first, I thought of perhaps using a venue such as the Golden-Age comic book forums that I’m a member of. I communicated my ideas in discussions with a solid chap named Australian Panther over at Comic Book Plus . He thought the concept was grand, but one much larger than forums would be able to accommodate. He then suggested that this project would be better housed on a site all of its own. With nothing but ideas, drive and a dream, I had no idea what I was getting myself into.

I immediately drew up plans to create and establish a blog site. It took painstaking dedicated hours, days of design, content creation and collaboration with a skilled family member on the web development portion. Finally, on November 28th 2019, The Vintage Inkwell Academy was officially born and launched online.

From its humble beginnings, TVIA quickly evolved into becoming an art instruction Academy of sorts. A vintage illustration art school, where one could study and learn the old-school art techniques of the past. A place where art creators and new students of illustration and Golden-Age styles can exchange educational references and discuss classic tools of the trade. It became a repository of rare art books, techniques and methodologies for those looking to develop their skills and elevate the level of their work. TVIA is also a site devoted to the support of vintage-style content creators and the promotion of their work. 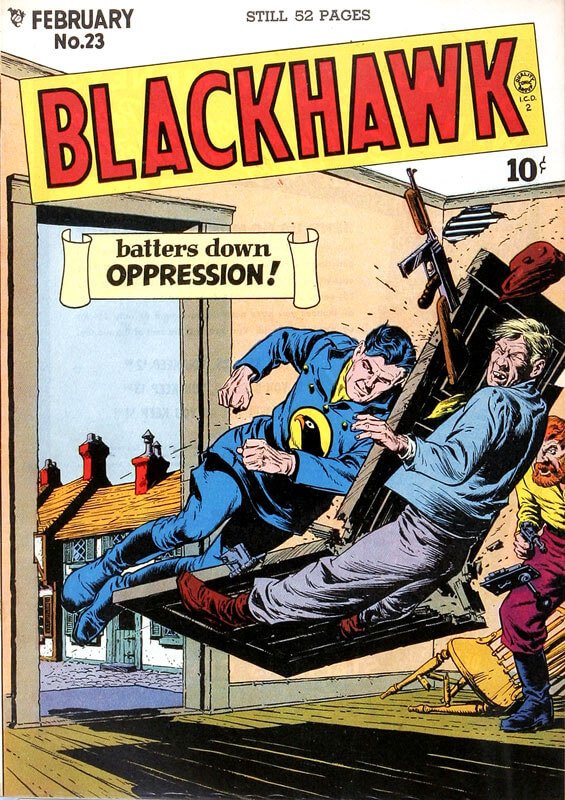 THE FALL… AND RISE OF THE AMERICAN COMIC BOOK

In my opinion, current comic books have greatly departed from what they once were and can now be considered a dying medium racing to the grave. Hear me out, it has fallen to this state because now comic books exist solely as a vehicle to harvest profits and propagandize specific agendas. The hard truth is that the corporate comic producers do not much care what their paying customers want. Mainstream comic conglomerates treat their customers like hostages to unilaterally dictate politically charged, agenda-driven content. It seems their primary mission is to cross-promote and mass market their brand and character rosters into expendable products. All characters and story content must transition into toys, movies, TV programmes, animation and so on, ad nauseam. The final product delivered is form over substance, trash wrapped in a pretty candy-coated shell.

The actual content creators working for these companies are either outright hacks or employees contracted to operate under strict, creatively constricted confines. Creators are no longer given any free reign to express their bold new ideas, fresh new characters and reap the rewards for their works. Instead they’re replaceable cogs regulated into factory producing tunnel-visioned, corporatized media. These substitute comic books are detached from organic reality, and have removed essential story telling, compelling characters, thrilling storylines and captivating dramatic action.

There is a consequence for this level of insatiable greed and control, and it is now causing unforeseen blowback for them. Long-suffering fans and readers are now voting with their dollars, dropping out to pursue and to purchase other exciting content like Japanese Manga. Some fans are giving up altogether and moving on. Still others are walking in the desert awaiting rescue and hoping for a sign of an oasis or a thriving independent creative community; anything to quench their damnable thirst. 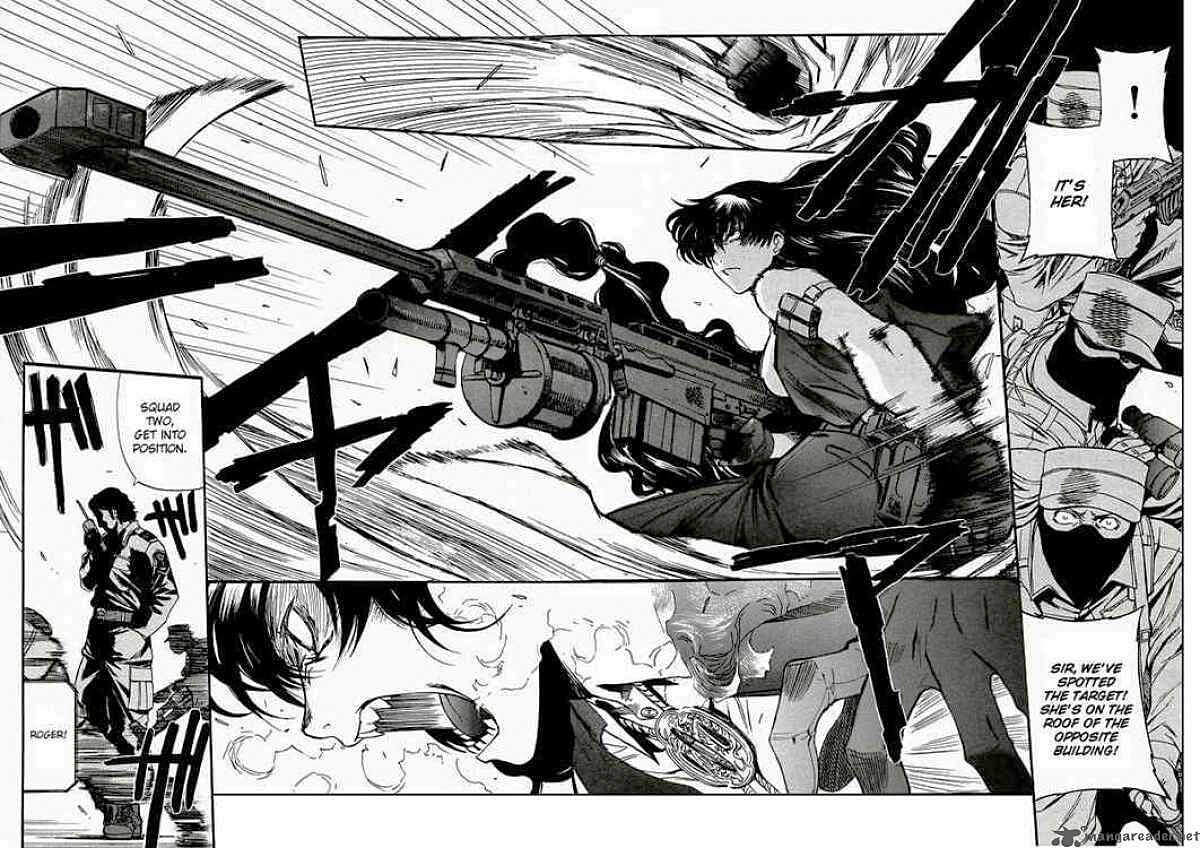 Captivating action and tense dialogue from the Japanese manga
Black Lagoon featuring Roberta. Now this is how to make comics!

Recently, I was reading many on-line comic reader’s accounts of how they love the comic book medium but hate the modern content. From these accounts, modern comics can be critically summarised as:

The unending morass of boring, unimaginative and un-relatable agenda-driven stories.Classic and resurrected characters are being ‘woke-washed’, only barely recognizable by their trademark costumes. Their backstories are virtue signaled and their core personalities stripped away.

In summation, it appears that the underlying mission of these companies seems to be delivering minimal, routine content at high prices. Readers and fans are thoroughly disgusted at this situation and greatly desire a better product at a fair price with great value and impactful content. One comic fan I read in particular stated “I have money in my pocket to spend and nothing at all I want to spend it on in the comic store”. I know that they are not alone, as I too have had this exact same experience when browsing the fare at the local comic book store. 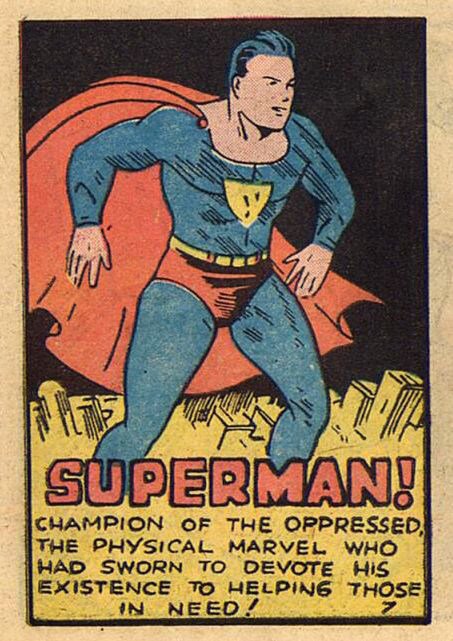 SUPERMAN! Champion of the oppressed. Where is the heroic ideal of today?

Thankfully, there are some of us who fortunately got to grow up consuming first class comic book fare. For those who haven’t, you’ll need a place to venture to in order to compare what once was, to what it has degenerated into now. I now take great pleasure in introducing you to Comic Books Plus and The Digital Comic Museum . They have both been an immeasurable Godsend in hosting legendary Platinum and Golden-Age classic comic books and much more. Check my links to them in the Links section at the top menu and experience a new world of mind-blowing adventure. I can truly say without reservation that they are a fantastic treasure, and without them, we would have no other place to find genuine comic books. It was there, I fully experienced the creative inspiration and artistic influence of Reed Crandall, Lou Fine, Matt Baker, Bill Everett, and Mac Raboy. Their extraordinary works showed me what illustrators fully engaged in their craft could do. Had those two sites not existed, I would have never seen, learned and elevated my art and storytelling skills to the degree that they are now.

The creators of Superman, Jerry Siegel and Joe Shuster, got their start wanting to create something brand new, something better. So they combined their talents to deliver something fantastically new into the world. This came from the simple seed of an idea, which germinated in the fertile soil of their limitless imaginations. It took root through the brilliance of their dynamic energy and established a legendary new hero for the underdog masses. They were motivated and absolutely driven to bring forth an iconic hero that challenged and fought all the things they felt powerless to change in the world. They established a super heroic every-man with zero tolerance for injustice and a will to stand up for the downtrodden. Where is that heroic ideal gone today? Where is the man or woman who lives by a code carved in stone, who rights the world’s wrongs against all odds? Where is that extra-ordinary individual with fortitude and courage? The citizen soldier who steps forward to champion justice and bring light unto the world? Where is this ideal noble saviour to galvanise and aid common oppressed humanity? 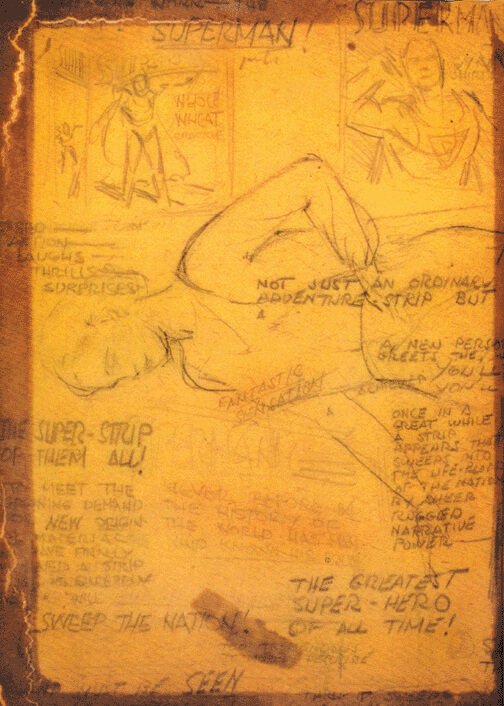 Rare original art of the prototype Joe Shuster and Jerry Siegel
worked on in the development of Superman.

ROLL UP YOUR SLEEVES AND LET’S GET BUSY!

The point of the matter is we don’t have to accept the death of conventional comic books. WE have the ability to turn this around! There’s a starving audience eagerly waiting for thrilling, memorable content that moves them and that they will support. I can tell you that with some grit, commitment and old-fashioned hard work, a bold new, exciting era can be launched. If we demand better, we must take it into our own hands to muster and deliver the will to change this around.

I, for one, am studying illustration and other disciplines earnestly to accomplish this dream. This work is not for everyone, for it is indeed arduous. It’s dedicated, often lonely work that requires an iron will, clever imagination, creative impulse and the strict discipline to see it all through. The joy and reward of which is producing great work that one can be proud of to share with the world. 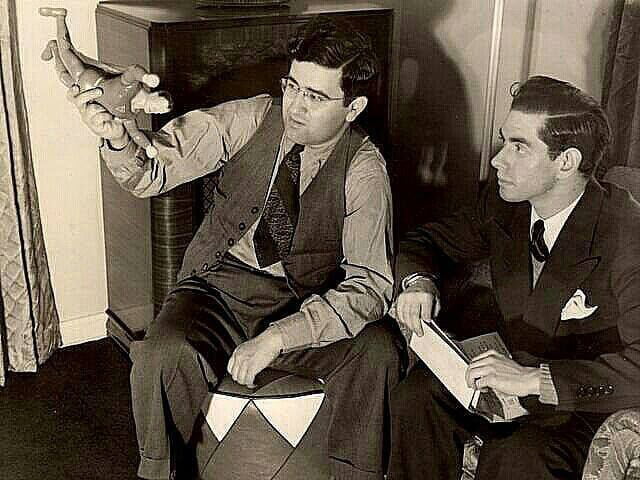 The crux of the matter is we don’t have to accept this and have the ability to turn this around. There’s a starving audience eagerly waiting for thrilling, memorable content that moves them and that they will support. I can tell you that with some grit, commitment and old-fashioned hard work, a bold new, exciting era can be launched. If we demand better, we have to have to take it into our own hands to muster the determination to change this around. I for one am studying illustration and other disciplines earnestly in order to accomplish this dream. This is not for everyone, it is arduous, dedicated and often lonely work, which requires a strict discipline. The return is the joy and reward of producing exceptional, fascinating work that one can proudly share with the world. Creator driven vision and exciting, resonant and life-affirming content produced to inspire the regular guy or gal in the street.

I can’t be the only one interested in this, and if we can collaborate with one another to bring about this grand new age, WE can be the change that we need to see. WE don’t have to wait on a profit-obsessed corporate kitchen to feed us whatever they want. WE can feed ourselves and perhaps make the world a wee bit better and much more fun. WE… can be this change, so come on, and LET’S GET AT IT!

See you all the next time and thanks for stopping by.

Special thanks to Bob Keough for his exceptional editorial assistance.

3 thoughts on “Welcome to TVIA”